Cheryl Sbarra, J.D., has been appointed the Executive Director of the Massachusetts Association of Health Boards (MAHB) by a unanimous vote of its Board of Directors.   Ms. Sbarra has been providing technical assistance, policy guidance, and legal education to local boards of health throughout Massachusetts as part of MAHB’s legal team for the past 20 years. 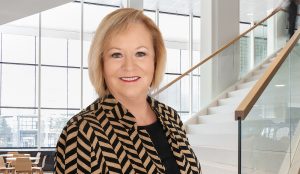 Marcia Testa, M.P.H., Ph.D., MAHB’s President and Vice-Chair of the Wellesley Board of Health, commented: “As Director of Policy and Law, Cheryl has demonstrated exemplary service to local health boards, departments, municipal officials and attorneys.”   Testa added, “She certainly has the experience, knowledge, and dedication to lead MAHB at the executive level.”

Joan Jacobs, MAHB’s Secretary and Executive Committee member since 1997, has known Cheryl since she first started with MAHB. Jacobs reflected, “She has been an enduring asset of MAHB right from the very beginning,  and that we couldn’t have accomplished as much as we have without her. Any legal situation that has come our way has been handled with professionalism and fairness to all.”

Marcia Rising, MAHB Treasurer and Executive Committee and MAHB Board member since 1987, also remarked: “Whenever I needed something explained, or guidance in a specific situation, it was always Cheryl Sbarra with whom I connected.”    Rising noted, “She always responded to my questions with great patience and her breadth of knowledge about Boards of Health and how they operated. To this day, I still phone or email her looking for guidance, and I know other boards also do.  During the COVID-19 pandemic, it has been a great comfort knowing Cheryl was at the forefront with all of the people helping guide us through the process of staying safe and well.”

Raymond Considine,  MAHB Director, stated, “I’ve had the opportunity to work with Cheryl on tobacco issues both as CEO and President of Health Resources in Action, and more recently as Chair and member of the Concord Board of Health. She has been an invaluable resource for Health Departments and public health advocates across the Commonwealth.”

A former member of the Framingham Board of Health and Executive Committee Michael Hugo stated, “Her depth of legal knowledge and her incredible understanding of the nuances of public health regulation has distinguished her as a nationally recognized leader and go-to authority.”

Ms. Sbarra is widely known for her MAHB work in the area of tobacco control.  During the COVID-19 outbreak and response, she has proven to be a valuable resource for guiding town and city officials on the lock-down and reopening orders issued by the Governor.   Before starting with MAHB, Sbarra served as the Massachusetts Department of Public Health Tobacco Control,  Regional Field Director, and the Director of the Tobacco Control Program for the Winchester Board of Health.  She received her J.D. from Suffolk University Law School and her B.A. in political science from Tufts University.

Sbarra lives with her husband of 38 years, Bill O’Leary, who is also an attorney. They have two adult children, a son-in-law and a nearly 2-year old “absolutely perfect in every way” grandson, Charlie.  Their daughter Katie is an attorney, and their son Burke is running a farm and an agricultural business.  When not practicing her profession, she and Bill enjoy cooking, entertaining, and traveling (at least they did before COVID).